Within minutes of publishing the first post, I started getting ideas of how such a proof might go, but I didn’t have the opportunity and the will to formalize it until just recently.

So we assume the existence of two non-isomorphic graphs on n vertices, G and H. Then we construct G’ and H’ by taking the induced subgraph that results from removing the vertices of degree 1 and (n-1) from each graph. All we have to show is that G’ and H’ are maximally irregular for order (n-2), and that they cannot be isomorphic.

To show that they are maximally irregular, consider what happens to the remaining vertices when the largest and smallest degree vertices are removed, as in the example order-15 graph below: 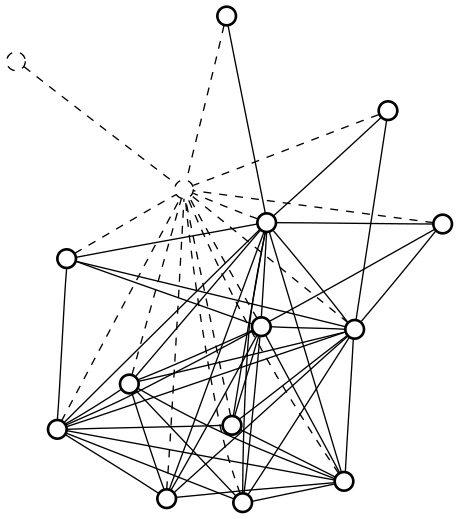 The degree-1 vertex was only connected to the degree-(n-1) vertex, and so its removal does not change the degrees of any of the remaining vertices. The degree-(n-1) vertex, however, was connected to every remaining vertex, and so removing it will decrement the degree of every remaining vertex. So this subset of vertices in the original graph had degrees in the range [2,(n-2)], and so decrementing each of them gives vertices of degrees [1,(n-3)], which is exactly the requirements for a maximally irregular graph of order (n-2).

All that remains is to show that G’ and H’ cannot be isomorphic. We can do this by contradiction — if G’ and H’ are isomorphic, then we can show that G and H must be isomorphic as well, contradicting our original assumption that they are distinct. To show this, let us assume we have a bijection between the vertices of G’ and H’ — I claim that if we use this same bijection for G and H, adding that the vertices of degree (n-1) are mapped to each other and the vertices of degree 1 are mapped to each other, that it will be an isomorphism. This should be obvious once we note that for the degree (n-1) vertices, all other vertices are connected to them, so they are trivially equivalent; and for the degree-1 vertices, they are only connected to the degree (n-1) vertices, which are mapped to each other. So the connections between the two graphs are preserved.

As a reward for anybody who actually read this far, I supply images of the maximally irregular graphs on 25, 50, 75, and 100 nodes.