There’s a drawing I made a couple years back that I posted on my original website, and I decided I ought to stick it up here to prevent myself from losing track of it.

I had the idea while I was taking a GIS class. The professor had mentioned the tactic of displaying statistics about geographic regions by distorting their size to match the statistic. I realized that it wouldn’t be difficult to scribble out a map of the United States where each state can have an arbitrary shape, but the boundary relationships have to be preserved (both the relationship of which states border each other, as well as which states are on the U.S. border).

And so this is what I came up with: 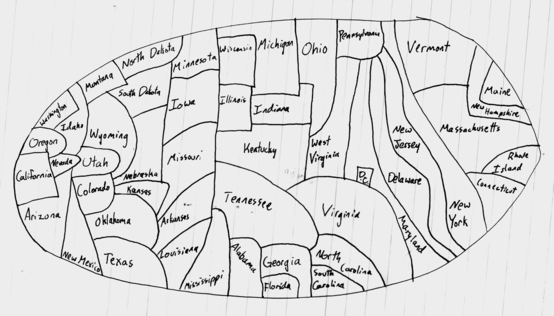 I’m not sure if I had ever consciously noticed the way that New York and New Hampshire both run along the U.S. border in two separate locations.

Everybody try this at home!