Why Your Grandma Can't Learn Computers

I was using my puter during class the other day when I was reminded of something I’ve thought about in the past, which is the reasons why your grandmother is never going to learn computers. 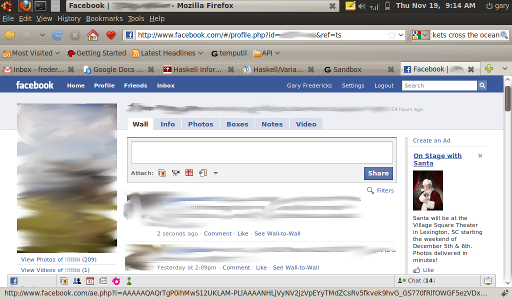 Let’s look at all of the different things going on in this screenshot, and the distinctions between them.

First of all, we have no less than six control bars that Grandma will have to look through to find the thing she wants to click, all stacked one on top of another.

The first one contains, among other various operating system features, the ability to switch between different programs. Grandma doesn’t know what a program is, so this will be a source of confusion.

The second line has seven different menus for this particular program, Firefox. If Grandma has figured out that Firefox has something particularly to do with the internet, or is even aware of Firefox as a distinct entity, it’s time to start questioning if she’s really a grandmother.

The third line has navigation buttons and two different text fields. The navigation buttons will be a source of confusion because Grandma’s not aware of the distinction between using the web browser and doing something else. So for example if she opened the web browser by clicking an icon on the desktop and she has a general sense of what the “back” button is supposed to do, she’ll probably expect that if she clicks the back button it will take her back to the desktop where she can click on the pictures folder. However, the back button will probably be disabled since this is the first page Grandma has opened, leading her to think that the computer is broken or doesn’t like her.

Then there’s the subtle distinction between the two text fields. You could try explaining to Grandma that if she has an explicit “web address” (it’s something that ends in “dot com”, or maybe “dot something else”, and it might have something after that too; if it starts with “www” that’s a good sign, but that’s not guaranteed either) she should use the left one, and use the right one for other things, but that’s probably not necessary since they’re almost interchangable: if you type your google query into the left text field, it’s probably going to search google, and if you type a web address into the google search field you’ll probably be at that site in a click or two. So the two text fields don’t represent two distinct functionalities, but instead are merely a reminder to Grandma that she doesn’t know what’s going on.

The fourth line has bookmarks. If Grandma has any bookmarks, she’ll end up using them to open up the same page repeatedly, since she doesn’t know about tabs and can’t tell that the page is already open in a different tab. This gets worse if she does figure out to click on the tabs some of the time (maybe just because she thinks they’re bookmarks), because it will seem that the browser can only remember the exact page she was on some of the time, and the rest of the time it forgets and takes her to the main page (the one actually bookmarked).

The fifth line has different browser tabs. Grandma will of course confuse these with the bookmarks and with switching between different programs. Just try explaining to Grandma the difference between a link that opens a new tab and a link that changes the location of the current tab (which is an important distinction if she’s going to be able to get back to the page with the original link). Did she understand it? I didn’t think so. Good thing you didn’t mention the possibility of a link opening an entirely new window (whatever that is).

Then there’s the sixth line, which has various navigational links for getting around Facebook. You never should have set up a Facebook account for your grandmother, but since you did here’s how things get worse: Grandma doesn’t understand the distinction between Facebook and the internet in general (or her operating system). Especially now that this 6th bar has a search field as well. So Grandma can’t tell if she’s supposed to search for things in the Facebook search bar or the web browser search bar. The Facebook one will give her general web results underneath all of the pages and groups results, so she might tend to use that exclusively, but that gets problematic if she’s on a site other than Facebook. So then she’ll tend toward the browser search bar, but wonder why she can’t get her nephews’ pages to show up in the results like it did that one time.

And then of course there’s more links, which have a similar functionality to tabs, except that you can’t tell which one you’re on. The “Home” link particularly may be confused with the Home icon in the third row of things, if she’s figured out what that does.

So far we have three standard tab-like ways to switch between activities: switching programs within the operating system, switching tabs within the browser, and switching primary pages within Facebook. Could it get any worse?

Of course! Because she’s on the profile page for one of her relatives where it has tabs for “Wall”, “Info”, “Photos”, etc. So she can even switch tabs within the same page on Facebook.

By now the odds that Grandma will have any idea what’s going on are not the kind that you’d want to risk even mildly serious money on. But just for good measure, let’s throw in a little Facebook navigation bar at the bottom, with some more buttons and things. That’ll teach HER to try to keep in contact with her family.