Every so often I come across a computational problem (usually of a more academic/theoretic flavor) that would benefit from some combination of the following features:

I’m referring mainly to a special class of problems, where most of the computation consists of pure functions that have small inputs, small outputs, but can run for a long time (long enough to justify the overhead of computing the function on a remote node). They are problems that can never have too many CPUs working on them.

Generally when these kinds of problems come up they aren’t important or interesting enough to bother building such a framework, and so it just doesn’t get done. I have a couple times shambled together an implementation in Erlang, which famously supports distributed computation natively using message passing. However, this really only provided support for features 1a and 4. Also, as fun as Erlang is in a sort of exotic way, the syntax and libraries can become tedious when you try to work on more abstract problems.

I’ve been wanting a good framework for these kind of problems for long enough that I put in a good amount of time designing and prototyping during the summer. I decided that the simplest way to handle the distributed aspect was to use a client-server model with standard HTTP. The only network requirement is one permanent server that can listen for HTTP requests from anywhere on the Internet, and such a thing is certainly not hard to come by (most people can probably do it from home). The server will keep the current state of the computation persisted in an ACID-compliant database, which makes it resistant to all but physical damage to the server itself. That risk, of course, is mitigated with diligent backups.

As for a general method for moving computation around, I think the simplest idea is for the server to send actual source code for the clients to execute. This choice has a strong impact on what language the problems should be written in, and suggests a homoiconic language where the source code can be easily manipulated by the program. Once we’ve used the word “homoiconic” in a sentence, it would be completely inappropriate if the following sentence didn’t proceed directly to Lisp. So I decided to go with Clojure, which is the new Lisp-For-People-Who-Write-Real-Programs. With Clojure we get a highly dynamic language to work with, and the only requirement on the client side is that the JVM be installed.

After deciding on the architecture, there was still challenging design work left to be done, particularly regarding the issue of how to write code for such a framework. I started with the concept of a task, which is just a piece of code to be executed on a remote machine, ideally running for several minutes, and with the result to be returned to the server. At first I decided this was sufficient, and that separate programs would have to be written to interface with the server or the database directly to set up the tasks, process the results, etc. Then I realized there would be value in being able to run long-running computations within the framework and not need any third party program to tie things together.

So the first requirement that comes to mind is that a task should be able to create other tasks. We don’t want a single task to run for more than a few minutes so that we minimize the time lost when a node goes down. So tasks being able to spawn new tasks is definitely required.

Obviously then the new tasks should have access to whatever it is that the old task computed, so they can pick up where it left off. And this suggests some sort of blocking mechanism, where you can create a task that is dependent on the value another task (or set of tasks) is computing. A simple example of this is a map-reduce algorithm, where the reduce task will have to wait until all of the map tasks are done. This seems natural and useful, but if the only concept we have is that of tasks, things get messy when the map tasks are long-running and need to spawn more tasks themselves. How does the reduce task know that the computation it’s waiting on is actually complete?

So I could tell that I needed some better-developed constructs. The best strategy I thought of for solving this problem is to separate the concept of returning a value from the concept of a task. For this I borrowed the term “Promise” from Clojure (which I’m considering returning if I can just come up with a good enough term of my own).

A promise is a placeholder for a value to be computed, as well as a reference to the value after it has been computed. A task has access to the promises given to it by its parent, and a task can create new promises as part of its return-actions. Any task with a reference to an undelivered promise can choose to deliver that promise, but a promise can only be delivered once. If several tasks are trying to find a value to fill the same promise, they can be registered to be canceled if the promise is delivered by another task first.

Tasks can also have promises as prerequisites — a task will not execute until all of its prerequisite promises have been delivered. In the case of a map-reduce algorithm, the map tasks will all have promises to deliver when their final value is computed, and the reduce task will have all of those promises as prerequisites. Note that the problem mentioned earlier of the map tasks not being able to spawn child tasks has been solved, because now any map task needing to spawn child tasks simply passes along the promise to whoever needs it.

So promises serve to tie tasks together. The rest of the entities are fairly straightforward, so I’ll cover them quickly. An assignment is a collection of tasks. More specifically it is one initial tasks and every task that is created from the initial task. It is a thing that you want to do. The tasks and the promises tying them together all fall under one assignment. The goal of the assignment, the final thing(s) to be computed, are implemented as “results”. A result is any final product of the assignment, not to be used again within the assignment, but to be consumed or processed by whoever created the assignment in the first place. Any task can create a result at any time, and an assignment can contain as many results as the tasks produce. An assignment can run infinitely, always producing more and more results.

A project is a collection of assignments that share common libraries. The libraries are where the real code should go — the code that makes up the tasks can be trivial, just a function call with some basic arguments.

I’ve been thinking about these ideas for a few weeks now, and I’ve convinced myself that they’re sufficiently general to be of use for a lot of problems. There may be certain kinds of problems that cannot be easily implemented using these constructs, but I hope that there will be lots of problems for which it will be useful.

I have a prototype with the following features already implemented:

And more features that are close to being implemented:

I mentioned the Fibonacci implementation as well as the debugging tool that creates diagrams, so I’ll demonstrate both of those here. The naive recursive Fibonacci function (with the source code here) takes the definition that f(n) = f(n-1) + f(n-2) and computes both recursive calls separately. In this case every call to the function results in five objects being created: two tasks for each recursive call with two promises to store the results, and a third task that waits for the promises to be delivered and adds them together.

Without getting too detailed, if we use this implementation to compute f(7) (where f(1) = f(2) = 1), the debugger produces the diagram below. In this diagram the blue elements are tasks, the green elements are promises, and the red element is a result. You can click on the image to see a larger readable version, or download the svg here. 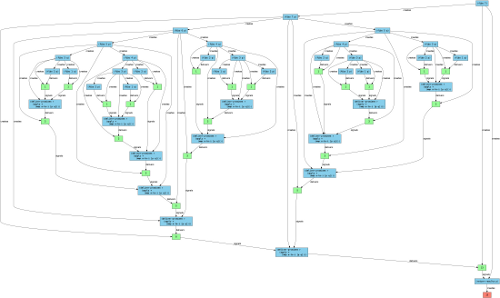 With most programming projects, making it usable for yourself is a lot easier than making it usable for others, and this is no exception. I am almost to the point where I will start using this for my own projects, but it’s not yet good enough that I would recommend it to anyone else. So I’m curious if anyone thinks they could make use of this, or would like to help with it. I definitely don’t see this as being any kind of commercial product, but just something to help individuals and groups better harness computer power to work on certain kinds of problems.