I've been working on some static visualizations of hash functions, starting with SHA1 and MD5 (images here and here, respectively). The two sample images show the process of computing the respective hash functions on the input "denny" (with ASCII encoding -- i.e., the input in hex is "64656E6E79"). A portion of the MD5 image is included below: 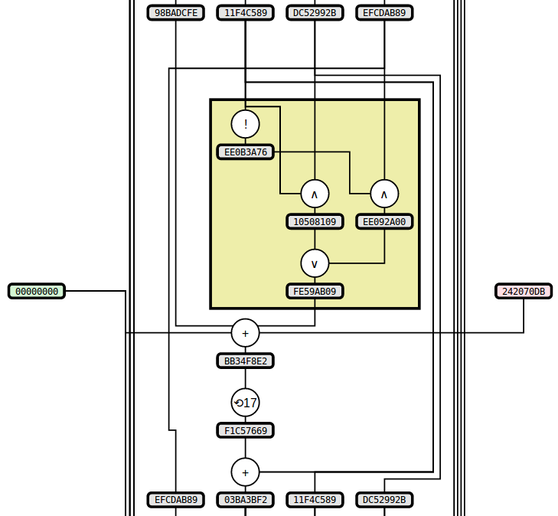 Notes about these two particular algorithms and their visualizations:

If you're curious about any other details of MD5 or SHA1, the specs are fairly readable, hopefully even more so with the diagrams to follow along with.

I'm hoping this sort of diagram can

Several things I think are worth exploring:

Big-endian looks more natural to me, so I display the hex value for words with the higher-order bytes first -- e.g., the word corresponding to the integer 100 is shown as "00000064". This means that internally both algorithms look the same (in particular the bit-rotations and addition-mod-32 operate the same way), but for MD5 the input and output words will have their bytes ordered the opposite of what you would expect. For the input "denny" where the first word comes from the substring "denn", the first word in SHA1 is "64656E6E" while the first word in MD5 is "6E6E6564". You'll also notice this if you try to compare the MD5 output shown with the value given by any normal MD5 utility.